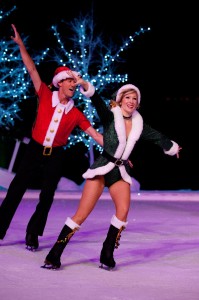 SeaWorld celebrates Christmas like no other theme park in Orlando with the number of holiday shows and decorations seen throughout the park with it’s Christmas Celebration taking place on special nights in November and December leading up to Christmas Day and through New Years Eve that is included with general park admission.

Over 100 Christmas Tree’s dot the lagoon in the center of the park that are choreographed to music in the Sea of Trees production. The Trees are also incorporated into the Winter Wonderland on Ice Show that incorporates ice skating, music, and the dancing trees in the background.

One of the most popular shows during the nights that SeaWorld celebrates Christmas is the O Woundrous Night Live Nativity show that features a choir, live animals, and puppets that tell the story of the Nativity with live camels and other animals. O Holy Night and a Gospel version of Go Tell It on the Mountain are highlights during the show.

SeaWorld’s most famous killer whale gets into the holiday spirit with Shamu Christmas Miracles. At the Waterfront, your children will enjoy the snow flurries while Christmas music is played.

Also during SeaWorld’s Christmas Celebration is Elmo’s Christmas Wish that features Elmo, the Cookie Monster, and other popular Sesame Street Characters. Clyde and Seamore’s Countdown to Christmas features a humorous sea lion Christmas show. Meet Santa Claus at SeaWorld during the holidays, and new for 2016, is a meet and greet with the characters from Rudolph the Red-Nosed Reindeer.